“Laughter is the shortest distance between two people.”

As grownups, we tend to think that to be effective, things have to be serious. But with children, sometimes the opposite is true. A lighthearted and playful approach can sometimes get better “results” – inspiring more cooperative behavior, a good attitude, and mutual feeling of connection.

During play, kids learn about themselves, others, and the world around them, and also develop their cognitive growth and motor abilities. Play is an essential way that children process emotion and to connect with you and the world around them. Kiddos don’t yet have strong connections between verbal and emotional parts of the brain, so asking a child to tell you what’s wrong or talk about their feelings often yields blank stares. But playing about or around an issue will get directly to the emotions!

Play also signals to the brain that there is no crisis, stimulating our sense of well-being, and helping us relax. This starts a virtuous circle, enabling us to approach the world feeling relaxed and open, connect to ourselves, others, and the world around, which in turn increases well-being and the sense of meaningfulness.

Whenever possible, we recommend employing a playful approach with your kiddos. You will be surprised and delighted at how much joy and good will this generates between you, and how successfully this can often turn around a scenario headed for conflict. 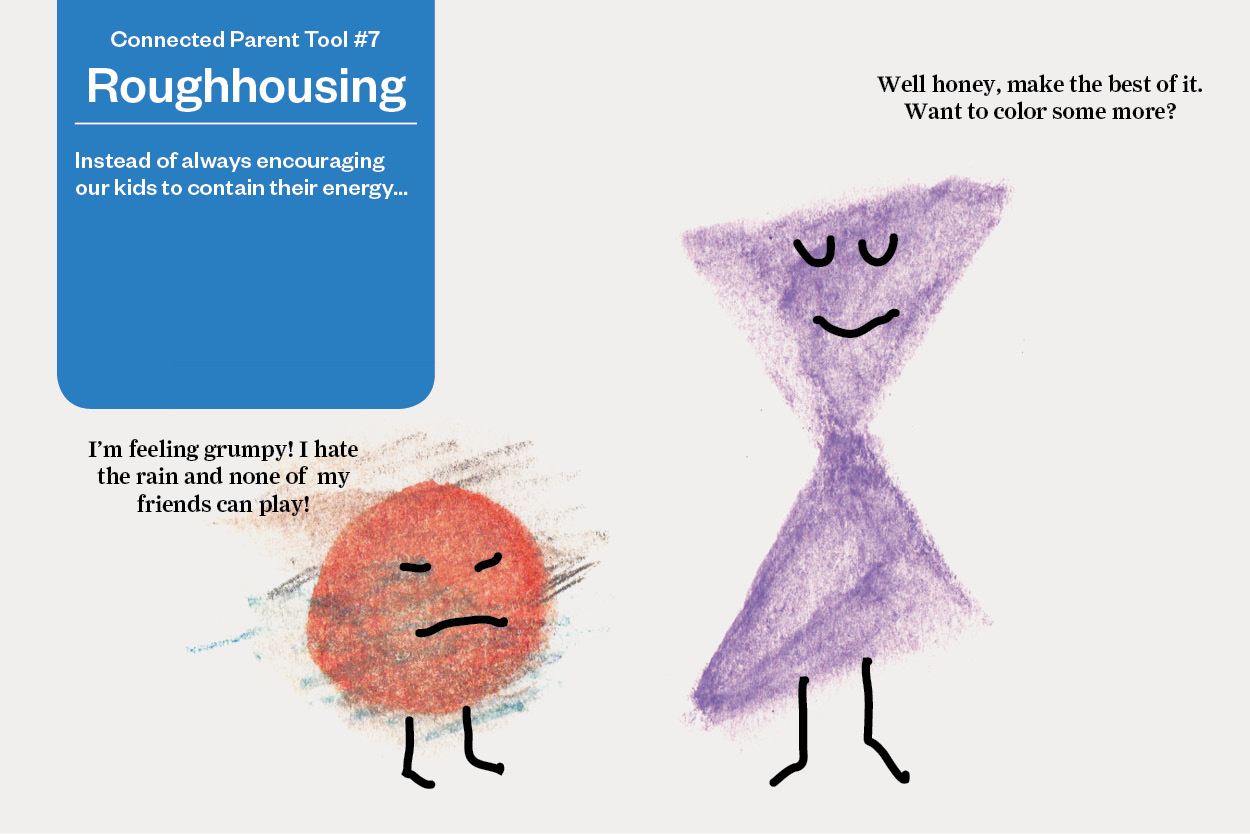 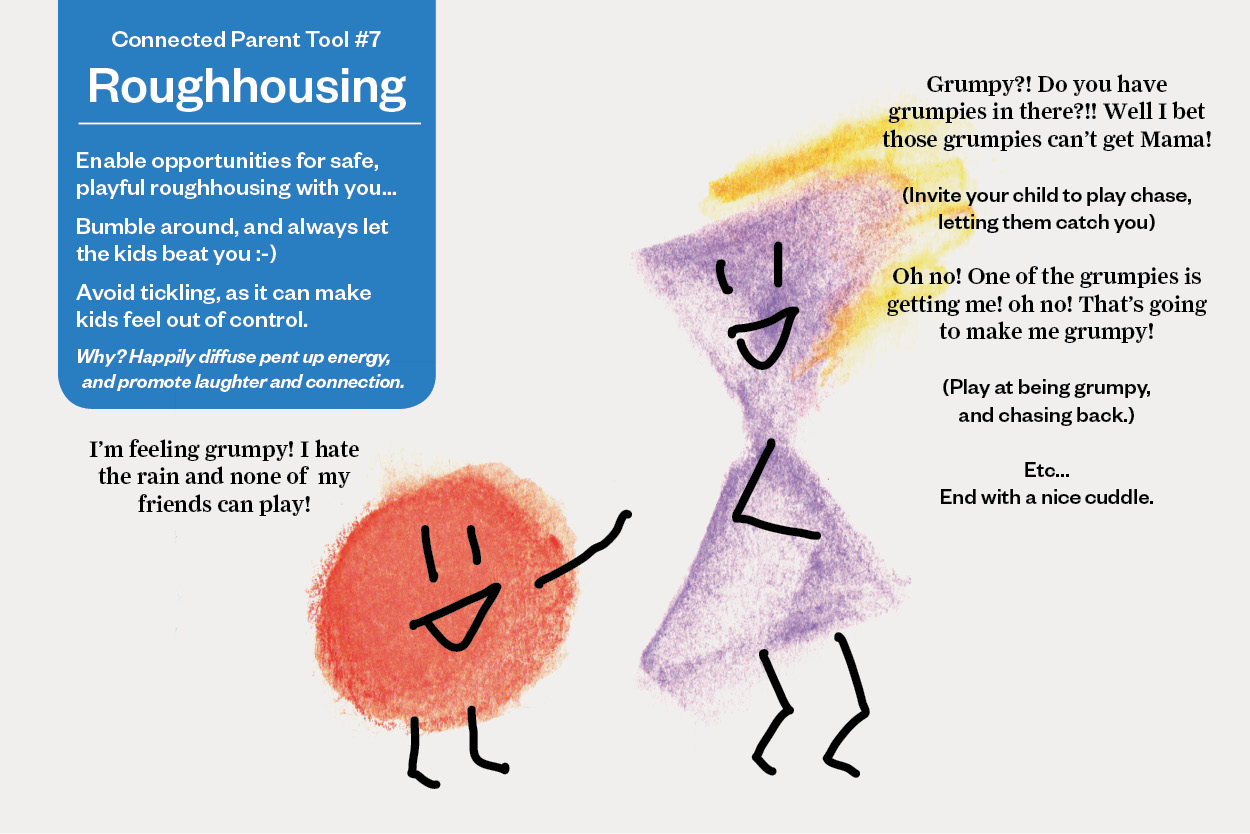 HOW TO DO IT

Try to make time for play regularly. Even 10-15 minutes of Special Time per day makes a real difference. (see more about

metaDescriptionSpecial Time is one of the most powerful ways you can connect with your child and create emotional safety for them. Here's how to do it.

) Play can also of course happen spontaneously outside dedicated play time, or in small doses throughout the day to help with transitions, upsets, or tasks that need to happen.

If you have more than one child, getting some individual, alone playtime with you is very important for each one. It will help with sibling issues, in addition to all the other benefits of play. Before starting Special Time with any child, make sure they all understand the schedule, and when they can each expect their turn. You can do Special Time when a spouse or other caregiver is with your other child(ren), or give the other kids a book on tape, or screen time when it is not their turn.

Here are several different types of play that are helpful for connecting, having fun, and helping children express stressful feelings and emotions in safe, productive way. Feel free to be creative based on the context or issue you may be dealing with, and mix and match elements of all these types of play into your games.

Kids of all ages benefit from self-directed play, following their imagination. Unstructured toys (blocks, to play structures, dolls or stuffies, dress-up, etc.) or materials (cardboard boxes, blankets, rocks, bottlecaps, etc) often enhance this play. For example, give your kiddo some cardboard boxes and markers on a Sunday afternoon, sit on the floor with them, and let the magic unfold.

Let your child know that they are in charge and that you will follow their lead. Follow according to the golden rule of improv: “Yes, and…” As in, “Yes, awesome truck you made, and I’ll be the passenger.” “Yes, we’re driving to the moon. What do we need to pack for our journey?” etc. Giving over the reins this way can be liberating for both of you, as you don’t have to plan or control what happens, your child gets to feel some authority. You both may be delighted at where your imagination takes you.

Role play is a great way to talk about scenarios that are troubling your kiddo, better understand what is happening in a situation that you haven’t witnessed, develop empathy for the characters, and brainstorm and practice various possible solutions.

To do role play you can use yourselves and assign different roles or characters. Or you can grab stuffies, trucks, or other toys, and assign them each a role. Or, you can even draw figures to be the roles in your scenario. Once you have the cast of characters, let your child choose which one they want to be, and ask them how the scene starts. Let the scene play out for a while, giving your child the opportunity to show you how it seems from their perspective, and direct it to the place where they are struggling.

For example, if you child is having trouble with a kid in their class, you could set up a scenario where you are your child, and they are the other kid. Let them start out the scene, and play it several times with you reacting in several different ways. Discuss what you’ve both discovered, and then let your child practice how they want to respond next time.

Or, you can just play “School.” Again, let them choose the character they want to be, and direct the scenario. Try different ways of responding as your character(s) and see what comes up.

Roughhousing is a great way to increase connection and let off stress or anger in a safe way. When kids are able to engage with their parents in a physical way, they feel more secure in the relationship and calmer overall. Some roughhousing games we love are:

Spontaneous rough housing can also be a helpful re-direct for kids who are in an angry state and feel like lashing out physically. For example, an older child is frustrated and starting to pick on their sibling. You can intervene and suggest a mock fight, where you play at vigorously punching and kicking the air, with a clear rule that there’s no physical contact; or a butt-bumping game, which is just what it sounds like; or a wiggle-every-part-of-your-body contest. Or any other game you can think of that will allow them to channel and shake off the aggression as opposed to lashing out at somebody.

If there are patterns of interaction that are causing distress or diminished connection, try play in which you reverse the roles. Role-reversal encourages empathy by letting everybody try out another person’s shoes. It's also great for venting and safe communication, as each person gets to show the other how they see them, in an exaggerated, humorous way. And it very often leads to problem solving, and almost always to laughter, which melts away stressful feelings. Some examples:

Another way to reverse roles is to playfully allow your kids to be ‘naughty’ and ‘defiant’ in a way that is satisfying for all of you. Choose something you don’t mind too much, maybe banging their feet on kitchen counter or untying your shoe laces. You can improvise play off something they do spontaneously, or instigate it yourself by saying “I really hope nobody bangs their feet on the kitchen counter this morning! You know that makes mommy sooo crazy!” while looking at them playfully. You can bet if you turn your back, you’ll hear some bangs, and when you whisk back around, will be greeted with some gleefully guilty faces. Playfully stomp around and inspect who could have made the bangs, ham up watching carefully so nobody will bang again, but then get “distracted” and turn around to let them bang again. This game can get the morning off to a bright and cheerful start.

Bloopers, or nonsense play, is another great way to lighten the mood. Think circus clowns and their brand of silliness. When your child is angry or upset, this can be a great way to deflect and interrupt their fraught thought-train.

For example, if your kiddo is picking a fight with mean words, you can reply with nonsense. “Oh, I’m a mean mommy? Well you’re a blipper! Yes, you’re a green and purple blipper! I’ve never seen such a bright blipper before!!”

Or, when coaching your child through a difficult new task, you can release some of their tension and frustration by trying the task yourself and messing up. Try doing it backward, getting it wrong, trying to hard or too little, asking for your child’s help, etc. Cheerfully shout, “Pobody’s nerfect!” and try again. This usually gets lots of giggles and resets your child to try again at the task.

These are some types of play to get you started, but you will likely invent and discover other games as you play together with your child. Notice what works – in terms of making you all have fun, feel connected, and release pent up emotions – and do more of that.

Sometimes during play, your child may initiate scenarios dealing with difficult and / or heavy topics, such as death, birth, weakness, abandonment, violence; or they want to regress (play at being a baby) or that their baby sibling has died, or a variety of things that can sometimes feel uncomfortable or past polite boundaries for adults. This is an important space for them to be able to work out “impolite” feelings, and so as much as you can, let them get into these fantasies and play along, giving them in the game the deeper feeling they seem to be needing. Notice any discomfort you have, to process later.

Lastly, give yourself time to learn to play, try to get into it and enjoy it yourself as well. Most adults aren't in good practice for play – let this be a gift your child gives to you. Playing with our kids can be an amazing way for adults to let off steam, as well as priceless bonding for your family.